WHY INDIAN NUCLEAR PLANTS ARE ACCIDENT-PRONE AND SOME MAY EXPLODE IN THE LONG RUN?

WHY INDIAN NUCLEAR PLANTS ARE ACCIDENT-PRONE AND SOME MAY EXPLODE IN THE LONG RUN?

Prof.T.Shivaji Rao, Director, Center for Environmental Studies, GITAM University
http://tshivajirao.blogspot.com/2011/10/why-nuclear-accidents-are-difficult-to.html
http://docs.google.com/viewer?a=v&q=cache:CIoFFyPS040J:www-pub.iaea.org/MTCD/meetings/PDFplus/2011/cn200/documentation/cn200_Final-Fukushima-Mission_Report.pdf+IAEA+expert+report+on+Fukushima+disaster,+June+2011&hl=en&gl=in&pid=bl&srcid=ADGEEShu3blUZ9pl6gmOgdPqoENw-smBhj7S5t7ZzCB_xXeGd2fiGFowFOWG7BwOgBHbiEQgtl8WdFT3I-2-mKV0BmNNPS8NKVCFPoHd8PLYb8h0uEb2xq_I5BCcXjFfVKRs5fyoCLTr&sig=AHIEtbR9asUD73EtD56ZBXDqh7qlS1tkhQ
The International Atomic Energy Agency expert committee enquiry report on Fukushima disaster clearly established that nuclear safety is bound to be impossible for sevral reasons as indicated in the report.
For instance the experts warned that complicated structures and organisations during a nuclear accident can result in delays in urgent decision making.
http://tshivajirao.blogspot.com/2010/04/nuclear-plant-risks-srikakulam-district.html
http://tshivajirao.blogspot.com/2011/08/diaster-consequences-of-kovvada-nuclear.html
http://bhujangam.blogspot.com/2011/08/probable-nuclear-reactor-1100-mw.html
http://bhujangam.blogspot.com/2011/08/economic-costs-of-nuclear-reactor_05.html
http://georgewashington2.blogspot.com/2011/04/ap-risk-of-nuclear-catastrophe-could.html
Are Nuclear Plant Accidents going to make a state or Nation go Economically BANKRUPT  ?
http://www.guardian.co.uk/environment/damian-carrington-blog/2011/jun/20/nuclearpower-nuclear-waste   [NUCLEAR POWER IS NEVER SAFE OR CHEAP}
(Note: British expert, Farmer, chose a source term of 5 million curies of Iodine-131 for a 10% core release and predicted high contamination upto 160km. from the reactor.  Beattie and Bell used a release of one million curies of Iodine-131 and predicted high contamination upto 144km. from the reactor.  Gomberg, an American expert considered the maximum core release under atmospheric inversion conditions and predicted very high levels of radio-active contamination upto 128km from the reactor.   All these studies indicate that an accident scenario for the 1100 MW Size-well reactor can be used to predict the socio-economic consequences of a nuclear accident for the different sites like Kovvada in Srikakulam and Jaitapur in Maharashtra to determine their suitability for establishing the proposed nuclear plants.) 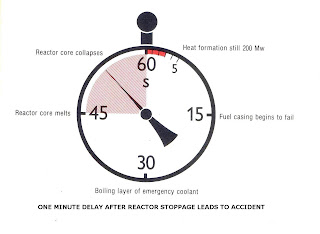 http://www.climateandfuel.com/pages/generationfour.htm
Advanced  passive safety Reactors
Questioning the safety of nuclear reactors Dr.Hannes Alfven, a noble laureate said “although the nuclear experts devote more effort to safety problems than others, the real question is whether their blue-prints will work as expected by them in the real world and not only in their technological paradise”
The growing number of nuclear incidents show that it is impossible to ensure complete safety even the most modern passive safe reactors.  Decay heat  needs pumped cooling water for an year to prevent over heating nuclear plants are some of the most sophisticated and complex energy systems and no matter how will they are designed and engineered, they cannot be deemed fail-proof .
Reactors are highly complex machines with an incalculable things including inter connected linkages that could go wrong.  In the Three Mile Island Reactor accident one malfunction led to another malfunction and then to a series of others until the core itself began to melt and even the best experts did not know how to respond .  A combination of electrical, mechanical and human failures can disable the reactor itself.  Indian work culture is not as reliable as the work culture of the nuclear plant operators of a highly technically advanced country like Japan where the Fukushima reactor accidents proved that nuclear accidents  cannot be forecast  and prevented  in time and hence under Indian work culture of unreliable dimensions and unfavourable circumstances like the growing social unrest due to political corruption that promotes terrorist activities including bombing, accidents as are occurring in major cities like New Delhi, Mumbai and Hyderabad  the nuclear plants are bound to fail in the long run.
http://www.parliament.uk/documents/post/postpn222.pdf
Terrorist Attacks on Nuclear Plants-Report to U.K. Government
http://en.wikipedia.org/wiki/Nuclear_safety
http://www.deccanchronicle.com/channels/cities/hyderabad/kovvada-n-plant-be-safe-469
(Kovvada Nuclear Plant  claimed to be safe due to improvements)
http://bravenewclimate.com/2011/03/13/fukushima-simple-explanation/
Finally demographic and Meteorological analysis are made to evaluate the reactor sites to restrict the exposed population in the unlikely event of a large scale release of radio-activity and thus safety standards must be made known to the people who ultimately have to make a choice between the economic benefits of the nuclear power  and its long term risks to the health and welfare of the present and future generations and the decision to opt for the nuclear power in preference tos the more economical and renewable energy resources must be left in the hands of the public who are the ultimate decision makers in a social welfare state.
812. 1987, June - U.S.A.
More than 23,000 mishaps have occurred at US commercial reactor power plants since the
Three Mile Island accident in 1979, according to Public Citizen.
1979 - 2,310 accidents             1980 - 3,804 accidents          1981 - 4,060 accidents
1982 - 4,500 accidents             1983 - 5,000 accidents          1984 - 2,417 accidents
1985 - 2,974 accidents            1986 - 3,000 accidents.
(Public Citizen Critical Mass Energy Project WISE NC 275 June 87)857. 1987 - U.S.A.
http://www.ib.cnea.gov.ar/~protrad/biblioteca/3Accidentes.pdf
The Government and its officials are the public servants who have to work to promote peoples welfare and national progress by promoting the right methods of development in preference to the wrong methods of development which are ecologically unsound, economically ruinous and socially unacceptable and the Gandhian principles of sustainable development must be upheld because Indian ethos not only preaches but practices in letter and spirit the slogan of SARVEJANA SUKHINOBHAVANTU.

WHY NUCLEAR REACTOR SAFETY IS CONSIDERED AS A MYTH BY GERMAN CHANCELLOR
When the Swiss Government wanted to buy the US Reactors in 1973 , they demanded experimental proof that the dome containment would retain the radioactive pollutants released during a Loss of Coolant Accident (LOCA). Actual  Test is very expensive,Moreover, since an actual test would be more dangerous than nuclear bomb testing, assurances on reactor safety are entirely based on tests on paper using simulated mathematical models.
As such test results can not take into account the different permutations and combinations of malfunctions from defective materials, mechanical or human errors, sabotage, bombing, terrorism, missile hits, aero-plane crashes etc. they become invalid.
In other words, nobody can do all the necessary testing nor even anticipate what kind of tests are needed. At best, the experts may be able to simulate and estimate the answers to some of the questions asked by the people but do the people know all the questions that are yet to be asked for making the reactors absolutely safe for all time for different Natural and Man-made errors? Hence the proof of reactor safety could not be given and still has not been demonstrated.
But when the tests on the Emergency core cooling system designed to flood the core during a loss of coolant Accident[LOCA] were run at the National Reactor Testing Station in Idaho, mechanical failures occurred. When the tests were run during 1970-71 all the six tests conducted by the Aero-jet Nuclear Company failed. Subsequent experiments at Oak-ridge National Laboratoreis indicated that the Zircaloy-clad fuel rods of the Light water reactors may swell, rupture and block the cooling channels, and thereby obstruct the emergency cooling water from reaching the core and such obstruction which holds back the emergency core cooling water leads to a catastrophe sometime or the other. Thus reactor safety is most often a myth!
Questioning the safety of nuclear reactors Dr.Hannes Alfven, a noble laureate said “although the nuclear experts devote more effort to safety problems than others, the real question is whether their blue-prints will work as expected by them in the real world and not only in their technological paradise”
According to Brahma Chellany,[web site]
:http://www.rediff.com/news/column/india-corruption-nuclear-safety/20110318.htm,
Nuclear safety gets violated,....."
"The chain of incidents engulfing all six Fukushima reactors was triggered by their close proximity to each other.
With a flare-up at one reactor affecting systems at another, Japan has ended up with serial blasts, fires, spent-fuel exposures and other radiation leaks at the Fukushima complex.
The lesson: A string of events can quickly overwhelm emergency preparedness and safety redundancies built into reactor systems.This seriously calls into question India's decision to approve construction of six to 12 large reactors at each new nuclear park."
http://tshivajirao.blogspot.com/2011/10/why-nuclear-accidents-are-difficult-to.html
[Why Nuclear Reactor accidents are complex and unavidable in india ....?] 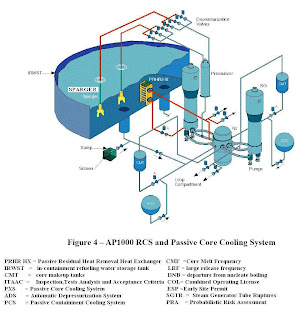 http://www-pub.iaea.org/MTCD/publications/PDF/te_1624_web.pdf
WHY NUCLEAR DISASTER RESPONSE FAILED EVEN IN A  COUNTRY LIKE JAPAN?
http://www.thehindu.com/sci-tech/article2755175.ece

TOKYO (AP) — Japan's response to the nuclear crisis that followed the March 11 tsunami was confused and riddled with problems, including an erroneous assumption an emergency cooling system was working and a delay in disclosing dangerous radiation leaks, a report revealed Monday.
The disturbing picture of harried and bumbling workers and government officials scrambling to respond to the problems at Fukushima Dai-ichi nuclear power plant was depicted in the report detailing a government investigation.
The 507-page interim report, compiled by interviewing more than 400 people, including utility workers and government officials, found authorities had grossly underestimated tsunami risks, assuming the highest wave would be 6 meters (20 feet). The tsunami hit at more than double those levels.
The report criticized the use of the term "soteigai," meaning "outside our imagination," which it said implied authorities were shirking responsibility for what had happened. It said by labeling the events as beyond what could have been expected, officials had invited public distrust.

"This accident has taught us an important lesson on how we must be ready for soteigai," it said.
The report, set to be finished by mid-2012, found workers at Tokyo Electric Power Co., the utility that ran Fukushima Dai-ichi, were untrained to handle emergencies like the power shutdown that struck when the tsunami destroyed backup generators — setting off the world's worst nuclear disaster since Chernobyl.
There was no clear manual to follow, and the workers failed to communicate, not only with the government but also among themselves, it said.
Finding alternative ways to bring sorely needed water to the reactors was delayed for hours because of the mishandling of an emergency cooling system, the report said. Workers assumed the system was working, despite several warning signs it had failed and was sending the nuclear core into meltdown.
The report acknowledged that even if the system had kicked in properly, the tsunami damage may have been so great that meltdowns would have happened anyway.
But a better response might have reduced the core damage, radiation leaks and the hydrogen explosions that followed at two reactors and sent plumes of radiation into the air, according to the report.

Sadder still was how the government dallied in relaying information to the public, such as using evasive language to avoid admitting serious meltdowns at the reactors, the report said.
The government also delayed disclosure of radiation data in the area, unnecessarily exposing entire towns to radiation when they could have evacuated, the report found.
The government recommended changes so utilities will respond properly to serious accidents.
It recommended separating the nuclear regulators from the unit that promotes atomic energy, echoing frequent criticism since the disaster.

Japan's nuclear regulators were in the same ministry that promotes the industry, but they are being moved to the environment ministry next year to ensure more independence.
The report did not advocate a move away from nuclear power but recommended adding more knowledgeable experts, including those who would have been able to assess tsunami risks, and laying out an adequate response plan to what it called "a severe accident."
The report acknowledged people were still living in fear of radiation spewed into the air and water, as well as radiation in the food they eat. Thousands have been forced to evacuate and have suffered monetary damage from radiation contamination, it said.
"The nuclear disaster is far from over," the report said.
The earthquake and tsunami left 20,000 people dead or missing.
Posted by SHIVAJI RAO- ENVIRONMENTALIST at 6:44 AM