http://www.eia.gov/countries/cab.cfm?fips=IN (Nuclear share is 1% of total energy in India)

AS  AN IRRITATED SNAKE  KILLS A MAN, NUCLEAR PLANTS SILENTLY  KILL  MANKIND AND NATURE FOR  FINANCIAL GAINS BY CONTRACTORS,OFFICIALS& POLITICIANS ?
Nuclear Plants are just silent killers of man and Nature created by the GOD. In nature the Uranium ore contains 99.3% of Uranium-238 and the remaining 0.7% is Uranium-235.  Uranium-238 and Uranium-235  in nature are least harmful.  But business people and other vested interests dig the iron ore and  convert  the least harmful Uranium-235  into the fuel form of Uranium-235  by purifying it to make a fuel by enriching it to about 4% of Uranium-235 that is packed in pellets and inserted into the core of the nuclear reactor for producing both electricity and material for making the bombs.   The reactor  when the nuclear atom is given a blow  by a neutron, enormous heat and other poisonous Radio-active atoms like Xenon, Barium, Cesium, Strontium, Plutonium and other dangerous radioactive substances are produced.  These radioactive substances are discharged into the air and water by several ways and  when they enter into the environment consisting of air, water and soil and foods like vegetables, fishes, prawns they ultimately get into human beings and produce cancers and birth defects in generations of people for many decades to come.  These poisonous radioactive substances  destroy natural and human life and culture and convert lands upto hundreds of kilometers into permanent nuclear burial grounds for ever.
How harmless Uranium ore materials in nature are converted into destructive and killer materials by man can be understood by the following simple example. For instance king cobras live in nature in anthills in forests and lead their normal life peacefully by catching their prey for food during nights But greedy people go and poke their iron rods into their abodes and disturb the Cobras when they become angry and bite the trespassers to inflict death over them by their poisons.   Similarly, the selfish people are mining the harmless Uranium and converting it into harmful  Enriched Uranium and then using it to produce electricity by means of the Nuclear plants and in the process they are producing Radioactive pollutants that poison man and nature slowly due to routine releases of radioactivity into the environment.  In course of time if an accident occurs in the Nuclear plant due to several reasons like in Fukushima or Chernobyl, the poisonous pollutants are thrown into the atmosphere and they kill thousands of people slowly and inflict cancer to millions of people living downstream upto hundreds of Kilometers as in case of Fukushima and Chernobyl accidents. The Nuclear plant operators are misleading the public by stating that Nuclear power is safe and cheap just like the medical representatives of various pharmaceutical companies praise before the doctors about the virtues of their medical tablets and tonics as part of their sale promotion activity the nuclear authorities are praising the nuclear plants as safe and cheap energy producers which is wrong.  This misinformation is dangerous to public health and welfare because in European states almost all people agree that safety of Nuclear (power is a Myth as accepted by Angela Merkel, Chancellor of Germany. She had consulted the genuine experts on nuclear plants and realized that nuclear safety is a myth and ordered for gradual closure of all the nuclear plants in Germany.  If Indian Prime Minister and Union Cabinet Ministers including the Chief Ministers of the state want to know the truth about the safety of the nuclear power plants they must go and visit advanced countries like Germany and Japan  and discuss the issue with foreign experts  so that they can refrain from promoting nuclear plants as is done by the peoples leader like Mamata Banerjee, Chief Minister of West Bengal.   For more scientific details see the above web sites on this topic prepared by independent experts.
Environmental Impact Analysis report are fabricated by consultants according to the national Green Tribunal and also according to the Chief Justice of India, S.H.Kapadia  who said “If you leave report preparation to the project proponent, I am sorry to say the person who pays will get the answers he asks for” and hence he called for a change in the system of preparation of EIA reports for the development projects.  See website:  http://www.thehindu.com/news/national/article2886141.ece
Tepco is expected  to pay 1.02 trillion yen up to March 31 in compensation to people affected by the accident, according to an October report of government investigation . The company finances. Compensation may total 4.5 trillion yen in the first2 years of the disaster,
Decommissioning  of the four damaged reactors   will cost about 1.15 trillion yen, according to the Expert Panel headed by bankruptcy lawyer  Shimokobe,the  head of the  fund to provide finances  to      TEPCO
The bill to clean up the contamination will be $14 billion over 30 years, as per the environment ministry
(For the socio-economic impacts of Kudankulam Nuclear accident analysis  be made as per guidelines  in the above website  containing the data for the nuclear accident at Sizewell reactor)
As per U.S.Expert on Nuclear plants,people should not live within 40 to 50 km.of kudankulam plant
http://www.nytimes.com/2011/12/17/opinion/is-indian-point-the-next-fukushima.html
However unlikely, the possibility of a major meltdown at a plant in the United States can’t be dismissed. And yet Gregory B. Jaczko, the chairman of the Nuclear Regulatory Commission, told Bloomberg last week that there would be enough time for millions of people in the region to get away “because nuclear accidents do develop slowly, they do develop over time, and we saw that at Fukushima.”


Dr. Jaczko said it was unlikely that a nuclear accident would require prompt action beyond “more than a few miles.” That might be correct in terms of avoiding immediate health effects from radiation ,although after Fukushima, he advised United States citizens in Japan to stay at least 50 miles away from the reactors. But his remark does not begin to capture the human and economic devastation in Japan. At Fukushima, some areas more than 25 miles from the reactors were contaminated beyond the mandatory evacuation level.


The lack of attention to possible land contamination is a major gap in the American system of nuclear safety regulation. After Fukushima, it should be the main safety concern — and one that is not addressed by evacuation, no matter how efficient.
NUCLEAR SAFETY CLEARENCES IGNORE COMBINED IMPACTS OF REACTORS.
http://jaitapur.wordpress.com/category/npcils-responses/

1] Safety for Each Reactor and not for Combined project. There are many sites world over having multiple reactors and the total nuclear power capacity at a park has no relation with safety which has to be ensured for each of the reactors separately.
1]EIA report does not address design/ safety concerns: Environment Impact Assessment (EIA) Study focused on the environmental aspects of the proposed nuclear power plant,
2]The design and safety evaluation is the responsibility of the Atomic  Energy Regulatory Board (AERB).
3]Clearances of the Ministry of Environment & Forest from environmental angle and of AERB from safety angle are the two statutory clearances which a nuclear power project has to obtain.
4] The design/ features of the project in the EIA report, like environmental aspects in AERB safety evaluation, are thus to be considered as for- the- sake- of –completeness only. 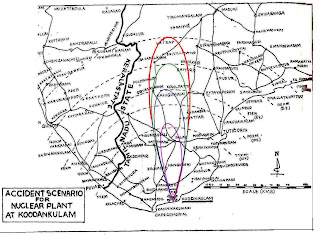 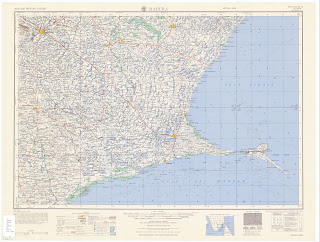 RISK ANALYSIS OF KUDANKULAM REACTOR ACCIDENT : REMEDIAL MEASURES SCENARIO FOR KERALA STATE
(Due to the reactor accident at Kudankulam  the following villages and towns will be facing the risks of poisonous radioactive pollution)
The details given above are approximate because the relevant detailed maps are not available with the author and they will be improved as soon as more details are received.
Note: Intervals between evacuation and reoccupation of original houses and lands after decontamination
Since the radio-active pollutants seriously pollute the lands, buildings and equipment, the people duly evacuated and rehabilitated in safer places, can return along with their cattle to their original homes in their native places only
1) after one year upto 170km and above from the reactor
2) after 5 years upto 135km from the reactor
3) after 10years upto  120km from the reactor and
4) after 20 years upto 80km from the reactor.
Depending upon the vagaries of the weather, some places may be more polluted than others. 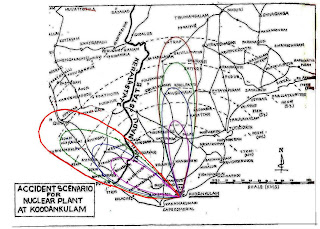 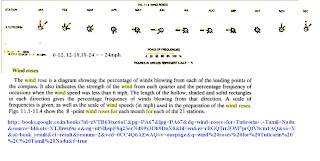 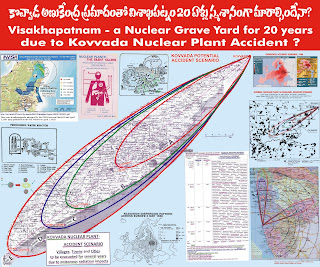 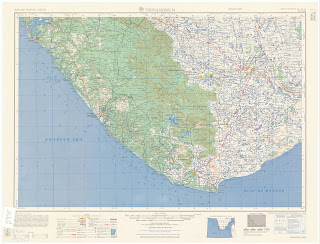 When it comes to things nuclear, we can not trust our our government as these fools can not even think of its consequences and the long term effect of their decisions. Every reactor leaks radiation all the time. After its useful life of 40 years, the reactor is a radioactive dump and if used fuel is stored it is like holding thousands of Hiroshima type bomb equivalent of radio active products that has to be safely stored for a million years. For eg one gram of plutonium can overdose one crore civilians. 100 grams can overdose one billion civilians if it comes to the environment. USA has made it illegal to transport plutonium by air in US territory for this reason alone. Such a prohibition does not exist for any other radioactive material. India has polluted the Ganges with four pounds of Plutonium already from the plutonium battery lost in 1965 in the Nanda Devi peak. The ice fields of the Nanda Devi Sanctuary feed the headwaters of the Ganges, and now Ganges is carryin plutonium particles as per the test results of the river sediment samples from the area. The Boston-based Chemical Data Corporation analyzed the samples and detected plutonium 239, and was reported in the Seattle Post-Intelligencer reports in 2005. The plutonium is breaking out of its protective sheath of the nuclear battery lost in 1965 by the CIA, IB team in Nanda Devi and it is poisoning the waters of the sacred river Ganges.

When prof.T.Shivaji Rao,an intyernational expert on environmental safety has presented a highly scientific article on the inevitable failure of kudankulam Nuclear plant why has not the responsible chief minister of Tamilnadu attempt to go to Germany on public demand to discuss Nuclear safety problems with the head of Germany,ms.Angerla Merkel as to how she concluded that nuclear safety is a Myth as per German Experts who afrde surely superior to indian half-baked experts as per sections 45 and 51 of the indian Evidence Act?
Why is it that Jayalalitha pretends to be innocent to grasp that nuclear power is inherently poisonous to mankind and Nature as indicated by the following example.
King Cobras live in big ant-hills in forests and they live in harmony with nature.But when a highly greedy person like a contractor or businessman wants to catch the cobra and squeeze its fangs to extract poison for selling it as a medical ingradient,he disturbs the habitat of the cobra which gets annoyed and raises its hood and bites the intruder and kills him.similarly,the Uranium ore in nature contains 99.3%Uranium-238 and 0.7%Uranium-235 which are naturally harmless .But the greedy people dig out the ore from the bowels of the earth and purify the Uranium-235 and increase its conent from 0.7% to 4% and thereby make a harmless U-235 into a fuel taht is packed into pellets and stacked in Core bundles of a Nuclear plant.When U-235 atoms are hit by nuetrons,they produce terrible heat of about 200 MeV and 2 to 3 more neutrons and other poisonous radio active substances like Barium,Xenon,caesium .Thus a harmless Uranium-235 substance is converted by Nuclear plants into a highly poisonous substance with long life of several decades to poison mankind and all forms of life. So how can you say that such Nuclear plants are safe even by violating the basic common sense and ethical and moral norms particularly in India which is Gandhian in its approach to life systems?Why the elected representatives of people in state assemblies and parliament fail to raise their voices against this planned genicide of indians by these killer weapons of Nuclear plants?Think twice before you leap into this Quagmire of nuclear power.
T.V.Rama Rao,Srikakulam